St Mary’s Church is an Anglican (Church of England) church in the Goring-by-Sea area of the Borough of Worthing. English Heritage has listed the church at Grade II for its architectural and historical importance.

The original Norman parish church was built in the 12th century (late Norman era) and a number of original elements can still be seen in the church today, these include the arcades, which appear to be the oldest part of the church.

Remodelling of the church has taken place throughout its history, notably in the 14th century and most recently in 1837 as part of Decimus Burton’s comprehensive restoration. Burton’s restoration is what gives the church its present day “Gothic Revival” exterior appearance. The rebuilding was undertaken at the expense of David Lyon, and is said to have cost £6000 (over £600,000 in today’s money).

Burton borrowed heavily from all periods of gothic architecture with elements from the 13th century next to features from the 15th. This can be seen in the windows of the gabled aisles and chancel, both modelled after the style of the early 1300s whilst the clerestory windows are of the 15th century style.

The 12th century arcades were retained and lightly remodelled by Burton to give us the subtly chamfered, plain, pointed arches we see today. The arches rest on square responds (a half-pillar attached to a wall to support an arch) with round pillars, featuring square abaci (slab forming the top of the capital) and scalloped capitals (section at the head of each pillar).

The tower at the west end is entirely Burton’s work, the original tower was located at the south-west corner and featured round-headed double bell-openings, probably from the late 12th century. There is evidence that the original tower featured heavy buttresses, and these may have been built following a bequest in 1361 for work on the church. The current tower has bell-openings with ‘Y’ tracery, a popular feature of the early gothic revival, and a shingled octagonal spire behind a parapet. The moulded west doorway sports shafts that appear to have been inserted for purely aesthetic reasons.

As the exterior is rendered, there is a possibility that some original walling or at least foundations might remain, protected from weathering and erosion.

Like many churches built in the 1800s, St’ Mary’s features a west gallery with an arcaded front, supported by iron piers. The roof displays moulded four-centred supports, spandrels (the space between the arches and the ceiling/moulding) with gothic tracery and prominent bosses (moulding where the roof ribs cross). Much of the detail is in plaster, and this will have been one of the last churches of this era to utilise this method of decoration. 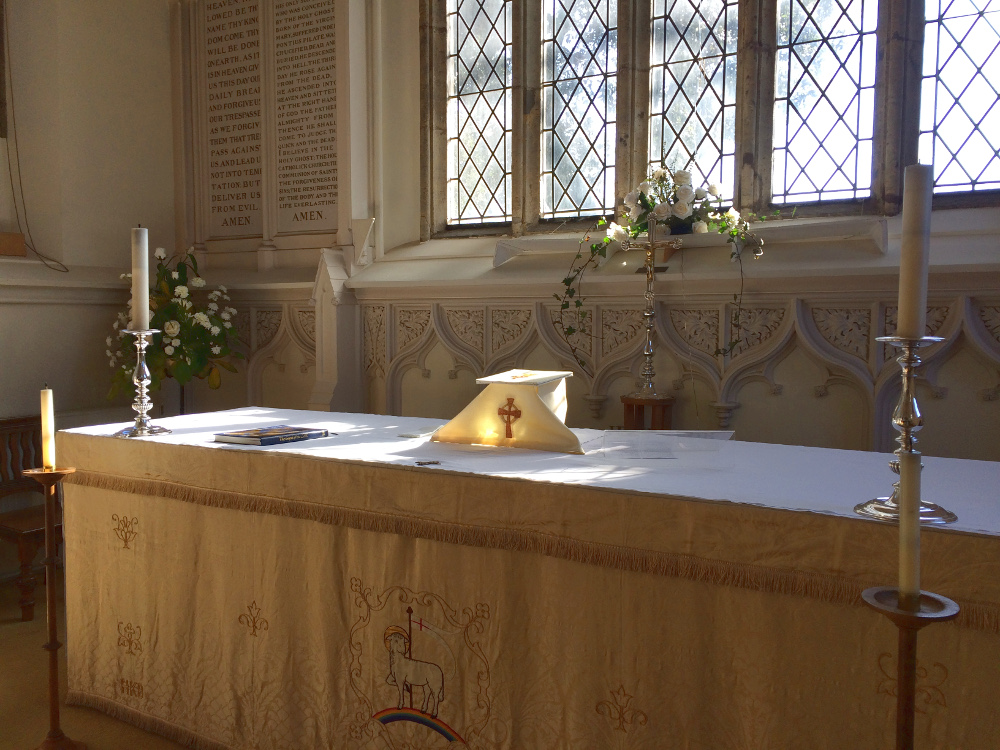 The pews were replaced in 1888 by J. O. Scott as part of a series of alterations, the cost of this work totalled £628 (£75,000 in todays money). At this time the raised timber pulpit and stone font were added as well as many of the chancel and other fittings.

The impressive mural over the chancel arch was painted in 1954 by the German artist Hans Feibusch. Titled “Christ in Glory”, its strength is its composition, and it features an unusually muted colour palette. At the time of installation, the mural raised significant controversy, forcing Bishop Bell of Chichester to use his authority to override the Diocesan Chancellor and grant a faculty. Concept sketches by the artist can be found in the vestry, however these are not on public display.

There are several paintings, monuments and features of interest within the church.

St. Mary’s hosts a memorial dedicated to those in the parish who died in the First World War, it is located on the south exterior wall of the narthex. The names on the memorial along with details of their sacrifice are listed in this Roll of Honour.

I would like to thank the following sources for information contained in this history: